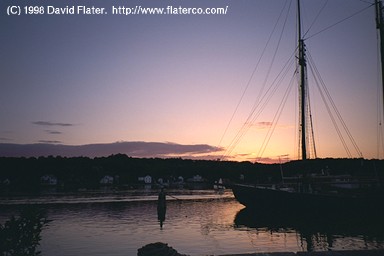 Very few of the ideas and very little of the know-how implemented in XTide originated with me.  I just took the ideas and knowledge of others and turned them into software.

Underneath all the fluff, the central tide prediction algorithm implemented by XTide is by the book, specifically U.S. Coast and Geodetic Survey Special Publication 98 by Paul Schureman.  It was originally published in 1924.  Fans of retrocomputing might be interested to know that tide graphs of the style produced by XTide were once produced by machines that implemented the algorithm in hardware, in the hardest sense of the word (see Figure 1, or read all about them at https://tidesandcurrents.noaa.gov/predmach.html).

Since we do it on a computer now, we had to make it a lot more complicated by handling subordinate stations, time zones, umpteen different output modes and formats, etc.  For those complications, I thank my colleagues ;-)

XTide 1 began as nothing but a tide clock with no other modes and very few details.  It grew like a weed with code and ideas being contributed by a small but industrious group of people.  Actually, "weed-like" is a very accurate description of how it grew.  Clone-and-hack was all the discipline we had.  Before long, the command line was cluttered with poorly factored, specialized switches, and you couldn't change anything without changing the same thing in nine places.  In short, the weeds took over the lawn.

XTide 2 was the result of a unilateral crusade to impose a coherent architecture so that the thing would become maintainable again.  Since that rewrite, outside contributions have been less frequent, but no less important.

In terms of actual source code in XTide 2, the people who contributed big chunks were:

Jan C. Depner was prolific in delivering the flat map, the World Vector Shoreline code, libtcd, tcd-utils, and inferred constituents.  Most of his work was paid for by the U.S. Naval Oceanographic Office, making them the first organizational sponsor of XTide development.  Thanks!

John Thorstensen allowed me to reuse code from his skycal distribution (ftp://iraf.noao.edu/contrib/skycal.tar.Z) to get the sun and moon calculations.

For the "black magic" of Congen and Harmgen, I had some mentors:

The late Edward P. Wallner was a mentor for several years.  With his assistance, I was able to fill in enough of the gaps in my understanding of SP 98 to write the Congen program.  Along with Hugh Casement, he helped to sort out differences in the tidal constituents used in various countries.  Ed's own tide-predicting shareware (now freeware) is archived for posterity at https://flaterco.com/files/wallner/.

Charles Read and Björn Brill provided the tutoring required for me to write the Harmgen program.

The support for Doodson style constituents in Congen was accomplished by reading and learning from Michael Foreman's publications and software by G. Godin and/or Foreman, which at the time were freely available on the web.

Other contributions in no particular order:

Thanks to Walt Bilofsky, August Hahn and Bob Kenney for miscellaneous help with data maintenance.

Thanks to everyone mentioned in the changelog for various patches, enhancements, and bug fixes.

Thanks to those who packaged XTide for Linux distributions and built contrib packages.

Thanks to those who ported XTide to other operating systems.

Thanks to Alan Eugene Davis for especially diligent beta testing.

The XTide 1 contributions are summarized below.  I apologize if anyone has been forgotten.

The original interpolation algorithm for subordinate stations with unequal offsets was contributed by Jean-Pierre Lapointe.

Finally, thanks to all the other testers and folks who complain when something breaks—you know who you are :-)