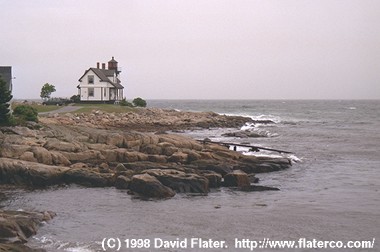 These installation instructions assume basic familiarity with the Unix command line and that you are building from sources obtained from https://flaterco.com/xtide/files.html.  If this is a big ask, there are other options:

The "tested" versions of libraries cited below are merely the versions that were demonstrated to work at the time of the last XTide release, for information in case a compatibility issue arises.

In addition to the minimal set of X11 libraries that pretty much everyone has, you need the following libraries:

The interactive client requires that the Schumacher fonts be installed with X11.  These fonts are always included with the X11 distribution, but their installation is frequently optional.

tide and xttpd can be compiled in the absence of X11 libraries and libXpm.  However, you still need the other stuff.

The configure script will look for Xaw3dXft, Xaw3d, or Xaw, in that order.

XTide will link with libgps if a compatible version is found on the system (tested ver. 3.16).  If a GPS is present and working, XTide will zoom in on your current location automatically.

XTide will link with libdstr if a compatible version is found on the system (tested ver. 1.0).  If no compatible libdstr is present, a local copy of Dstr 1.0 will be rolled into libxtide.

Optional:  If you want to enable XTide to draw coastlines on the map, you will also have to download the World Vector Shoreline (WVS) files, which are available in compressed tar format at https://flaterco.com/xtide/files.html#WVS.

You will download a file with a name similar to harmonics-dwf-YYYYMMDD-free.tar.xz.  With GNU tar, you can unpack it as follows:

With another tar that does not include builtin support for xz, you need to do this instead:

Unpack the archive in a temporary directory, then move the TCD file to a permanent location, e.g., /usr/local/share/xtide, and make it world readable:

The tar file also includes a change log and the disclaimers and terms applying to the data.

Under Linux and any other system with GNU tar:

Under Linux and any other system with GNU tar:

I.  Specify the location of the harmonics file(s)

There are two ways to do this.

Either set the environment variable WVS_DIR to the name of that directory or supply the directory name as the second line of the configuration file /etc/xtide.conf.

XTide is packaged with the popular and portable GNU automake, so all usual GNU tricks should work.  Help on configuration options can be found in the CONFIGURE-HELP file or obtained by entering ./configure --help.

The web server xttpd is not necessary to use tide or xtide, so most users needn't worry about it.  However, if you plan to run it, there is additional configuration at this point.

(New in XTide 2.15)  If your system uses systemd instead of init, you must configure with --enable-systemd to be able to run xttpd as a systemd service.

To change the user and/or group under which xttpd tries to run (the defaults are nobody/nobody), provide the options --with-xttpd-user=user and/or --with-xttpd-group=group to configure.  If you want to run xttpd but you don't have root, you will have to set these to your own username and the name of some group to which you belong.

You can also set the webmaster address for xttpd this way.

IV.  Other optional and alternative configurables

You can change the compile-time defaults (colors, etc.) set in libxtide/config.hh if you so choose.  However, the easiest way to set all of those things is with the control panel in the interactive XTide program.

The e-mail address for feedback in xttpd can also be changed by setting the environment variable XTTPD_FEEDBACK, in lieu of the configure option mentioned above.

(With GNU make you can say make -j 8 to run 8 compiles in parallel if you want to speed it up.)

If xttpd was built with --enable-systemd, additional steps are needed to complete the installation.

If you don't have any version of X11 installed and just want to compile xttpd or tide, generate a Makefile using ./configure --without-x.

Linux environments for Android now include Termux, UserLAnd and GNURoot.  I have not explored these yet, but in 2018-10, Paul Poffenberger reported that XTide built "almost" out of the box using the tools available from Termux.  (Linux software is expected to need patching when it is built for Termux.)

The XTide distribution does not provide a complete native Android app, but the basis for such an app, libxtide, can be built using the NDK.  An example script for cross-compiling libpng, libtcd, libxtide, tide, and xttpd for Android on x86 or x86_64 Linux is in the XTide distribution as scripts/Android/build.sh.  App developers can follow the example of MX Tides to add a JNI layer and GUI.

The tide and xttpd binaries produced by build.sh can be run from a shell prompt on a rooted device.  Pointing a web browser at xttpd on the loopback address (http://127.0.0.1/) is a quick and dirty way to get a GUI.  (Change for XTide 2.15:  Android's xttpd now runs in the terminal instead of forking into the background, but otherwise works normally.)

XTide can be compiled and run using Cygwin, which is an emulated Unix environment for Windows that is free for typical non-commercial users.  The Cygwin distribution and its full license terms are available from http://www.cygwin.com/.

Cygwin packages are all versioned separately, so there is no baseline "Cygwin version" against which to test XTide.  Testing was most recently performed with XTide 2.15 using the collection of packages that was current as of 2016-01-23.  As of then, the quirks apparent after brief testing were as follows:

[A prebuilt DOS binary for the command-line client is available in https://flaterco.com/xtide/files.html#contrib.  It is usable in a DOS box under any 32-bit version of Windows and in DOSBox under 64-bit Windows.]

Don't laugh:  the DOS binary works better under Windows than the native Windows one does.

A DOS binary for the command-line client tide can be built using DJGPP.  The following instructions were last validated on 2016-01-25 with XTide 2.15 and DJGPP 2.05.

If using hard-core DOS, both a Long File Name (LFN) driver and a DPMI provider must be installed.  Recommended:

If using a DOS box (CMD.EXE) in a 32-bit version of Windows, LFN and DPMI should just work.

When unpacking zip files, use the unzip32.exe that is distributed with DJGPP to prevent file names from getting broken.

File names on NTFS must be created in the DOS namespace.  Linux ntfs-3g doesn't do that.  Similarly, the LFN implementation in Linux vfat is not entirely compatible with doslfn.  It only works reliably if you mount the vfat partition with the option shortname=winnt.

For the validation build, the following DJGPP files were installed (unzipped in C:\DJGPP):

The environment variable TZ should be set to the zoneinfo identifier that is appropriate for your system clock.  For example,

If this is not done, predictions will still be technically correct, but XTide will have the wrong idea of the current time when deciding what range of predictions to generate.

The following behaviors will differ from the default Unix behaviors:

[A prebuilt Windows binary for the command-line client is available in https://flaterco.com/xtide/files.html#contrib.  It still runs in a DOS box, but is compatible with 64-bit Windows.]

When built with Visual Studio, XTide has to use an undesirable workaround for the absence of the Time Zone Database, and the resulting binary might not run on a different version of Windows.  On 32-bit Windows, the DOS+DJGPP build is simply better.  On 32- or 64-bit Windows, best results are obtained using Cygwin or a Linux VM.

For Windows and Visual Studio, a script that builds zlib, libpng, libtcd, libxtide, and finally tide is available in the XTide distribution as scripts\VS\build.bat.

As configured, the following behaviors will differ from the default Unix behaviors:

For example, you could put the following in an xtide.conf file in the current working directory:

There are some CPU bottlenecks that are observable only on very old hardware.  Real time estimates in the following are from a 166 MHz Pentium PC:

The –aa setting that formerly could be used to speed up drawing on true color displays by disabling anti-aliasing was retired in XTide version 2.12.

Q: XTide compiles, but when I try to run it I get an error like the following about libtcd, libdstr, or libxtide:

A: This happens when g++ found the shared library but your dynamic linker didn't.  There are several possible fixes.

First, try running ldconfig as root (sudo ldconfig on Debian-like distros).  This will fix the problem if the dynamic linker has a stale cache of the directory to which the libraries were installed.  But if the libraries were installed to a directory that is not in the dynamic linker's search path, it won't make any difference.

If the libraries were installed to a nonstandard directory, the least invasive fix is to add that directory to the environment variable LD_LIBRARY_PATH.  For example, if you find the library in /usr/local/lib, you would add this to your .bashrc (if using bash):

Or you would add this to your .cshrc (if using csh or tcsh):

An alternative is to hard-code the directory into the executable using magic GNU linker switches:  configure with LDFLAGS="–Wl,–rpath,/usr/local/lib" and rebuild XTide.

Another alternative is to edit the system configuration to add the nonstandard directory to the dynamic linker's search path.  On Slackware, you just add the directory to /etc/ld.so.conf.  Debian/Ubuntu prefer to add files in the subdirectory /etc/ld.so.conf.d.  After making the change, run ldconfig again to update the cache.

Finally, if all else fails, you could link statically with the missing libraries.

Q: When compiling XTide, I get thousands of warnings of the form "warning: 'auto_ptr' is deprecated".

A: To suppress these nuisance warnings in GCC, use CPPFLAGS="–Wno-deprecated-declarations" or upgrade to GCC 4.6 or newer.

A: Do make xmlclean and then try again.

Q: Using a DJGPP-built tide program in a DOS box in a 32-bit version of Windows, I get

But the file is THERE!

If it says harmonics.tcd but not also HARMON~1.TCD, then the file was created in the wrong namespace.  Recreate the file in a DOS box and confirm that HARMON~1.TCD then appears with dir /X.

Q: Using a DJGPP-built tide program in a DOS box in a 32-bit version of Windows, I get "Your platform appears to have broken time zone support.  You need to get the DJGPP zoneinfo package and unpack it in C:\DJGPP."  But C:\DJGPP\zoneinfo is THERE!

Q: DOS again...  I unzipped the files under Linux into a vfat (FAT) file system, and now I've got problems in DOS like missing header file, broken time zones....

A: Yup.  There's something incompatible in the LFN implementations.  Don't ask me why, but this only works reliably if you mount the vfat partition with the option shortname=winnt.